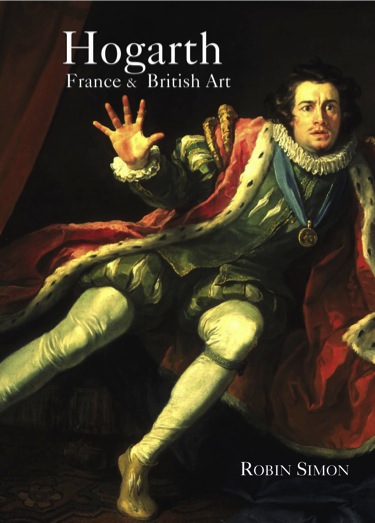 Some of the reviews …
‘Robin Simon has written with pace and passion the best book yet on Hogarth, encyclopaedic in
its range…’
Brian Sewell, The Standard
‘This highly original book convincingly defines almost the entire career and output of William Hogarth in relation to France… deals with Hogarth’s theatrical background in far more depth than anyone so far… a great wealth of surprising and fascinating information.’
David Bindman, The Burlington Magazine
‘… a rich, invigorating and highly individual addition to Hogarth scholarship’
Jenny Uglow, Daily Mail
‘Robin Simon’s brilliant tour de force of scholarship provides a vivid picture of all aspects of English cultural life in the 18th century’
William Palin, Country Life

Hogarth, France and British Art is a radical reappraisal of the art of William Hogarth (1697-1764).

In this wide-ranging but richly detailed book, full of analyses of individual works, Robin Simon opens a window on to one of the most creative periods in British life.
Hogarth liked to present himself as anti-French, but British culture in his time habitually defined itself in relation to that of France. Robin Simon argues that Hogarth was no exception, and that he was able to create a distinctively ‘British’ art chiefly through his profound knowledge of French art and theory.
Robin Simon also examines the ways in which Hogarth interacted with his contemporaries, in painting and print-making, sculpture, poetry, the novel, the theatre, art education, music and opera. Drawing upon a mass of fresh material, and many unfamiliar images, the book reveals the British and wider European context within which Hogarth’s art was formed.